Ty Longley loved The Simpsons, running, boogie boarding in the ocean, writing in his journals and the Pittsburgh Steelers. Perhaps most of all, the 31-year-old guitarist for Great White loved playing music. 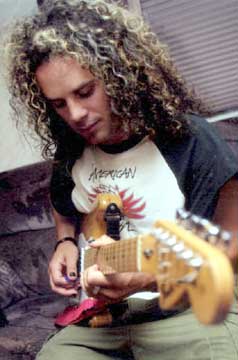 In a journal entry for October 2002, Mr. Longley wrote about his experiences on the road with Great White, from having dinner at the Space Needle in Seattle to checking out fall foliage in Massachusetts.

“I’m grateful for the time I do get out here and know it’s truly a blessing to utilize my gift,” he wrote.

Mr. Longley, 31, was born in Sharon, Pa., and grew up in Ohio before moving to California to try to make it in the music business. At the time of his death, he was living in Northridge, Calif.

His first musical gig was with a band called Chains, in Youngstown, Ohio. “God bless my family for enduring that one,” he wrote.

Mr. Longley joined Great White in 2000, when the band was looking to replace founding guitarist Mark Kendall. He toured with the band in 2001, and when lead singer Jack Russell launched a solo career, he hired Mr. Longley as a member of his touring band.

Kendall re-joined Great White last year, but the band decided to use a two-guitar lineup and keep Mr. Longley on.

In a tribute to Mr. Longley on the Great White Web site, band manager Paul Woolnough wrote about Mr. Longley’s dedication to his music. The last time they spoke, Woolnough wrote, they discussed a solo CD that Longley hoped to record when he got back to California.

Knight Records, Great White’s label, is planning to release an album of Mr. Longley’s music in the near future.

But Woolnough also wrote about Mr. Longley’s personal side – his daily trip to Starbucks, where he would linger and write in his journals, his enthusiasm for running, and his devotion to The Simpsons.

(Woolnough would record the shows while Mr. Longley was on the road so he wouldn’t miss an episode.)

Jason Williams, bassist for the band Trip, which was opening for Great White, said Mr. Longley was a pleasure to be around on the road:

“As far as guys go he was one of the greatest guys you would ever hope to meet in the world,” Williams said. “He was constantly keeping people laughing on the bus. . . . He never was moody, he always had a bright chipper personality every day.”